BORODINO: THE MOSCOVA: The Battle for the Redoubts is a useful reference for painting figures for Napoleon's 1812 campaign in Russia, but the other information in it is less useful, and it spends very little time describing the battle of Borodino itself. It definitely would not be good as a general introduction to the battle or the uniforms of the participants.

The book includes many uniform plates which cover every division that took part in the Battle of Borodino from both sides. These are excellent and very detailed, though not exhaustive. I can't speak to the accuracy of them, since if I knew everything about the uniforms already I wouldn't need the book, would I? They would definitely be most useful to someone who already knew the basics about the uniforms involved, however. As I mentioned, the book wouldn't be a good introduction to the uniforms, as it doesn't really cover the basics. There are many examples of Russian infantry uniforms from various divisions, but they don't all have captions, and there isn't an explanation of why one might differ from another. Does the uniform differ because he is an NCO? Because he is in a different company or a different regiment? Most of the captions mention the rank of someone, and if they are a grenadier or a drummer or what have you, but without any explanation of how this is reflected in the uniform. So if you already know the basics like that, this is a great reference.

Speaking of which, I have found this website to be an incredible reference for everything about Napoleonic armies. You can easily find the general information about Russian uniforms on that site, and a lot of details as well.

The book also contains a huge number of portraits of many of the main players and other high ranking officers. This may or may not be valuable when putting together an army, but it is interesting to put a face to the names. There are also various paintings of the battle reproduced in the book, so it contains plenty of things to look at in terms of reference information and just general inspiration.

The main drawback to the book is the text. As I said, the pictures are great, but the text leaves something to be desired. First of all, the translation from French was just terrible. Some parts are almost unreadable because they are confusing or contradictory, and much of it is just badly worded. But even if the text was well translated, there isn't much of interest in much of it aside from the lists of units.

The description of the Battle of Borodino takes up 15 pages, and is very mechanical. It's mostly just a chronological description of when various formations of men moved and to where, without much real context to it. It's not very evocative, and it doesn't provide much inspiration. The 15 pages does include 6 maps showing the position of forces, many nice paintings, plus a few drawings of how the redoubts were laid out. These are all nice, but four of the 15 pages are just paintings and have no text on them at all, and most of the pages have something besides text, so that probably gives you some idea how basic the description of the battle is.

In addition, the author seems to be very biased in his views and what information he presents. It seems to me like the only purpose of the text is to convince the reader that the French army was hugely outnumbered and at a great disadvantage, yet managed to win a great an unmitigated victory at Borodino, killing 5 times the number of enemy as they lost themselves. Napoleon only waited around in Moscow afterward because he had the decency to give Alexander the chance to capitulate, which of course any upstanding gentleman would have been obliged to do after such a devastating defeat.

At any rate, the bulk of the text of the book is just a listing of the forces involved, which is more useful from a gaming perspective. Here, too, there is a bit of bias as the French forces are described with much more detail, though this may have been due to availability of sources of information. Naturally the author takes every opportunity to conclude that Russian formations included more men than usually attributed, and the French of course had far fewer.

For the Russians, it does break the army down to list each corp, it's divisions, and the regiments in each division. The number of men is only listed at the corp level, which may or may not be enough for gaming purposes. For the French forces the number of men goes down to the divisional level at least, and most of them down to the number of men present in each regiment. On the French side, it also lists what seems like every officer in the entire French army, down to those on each general's staff and leading every division, in excruciating detail. If you've always wanted to know where, when, and how some random aide-de-camp of some random general met his end, or what decorations he received during his military career, now you'll know. Really, I'm not exaggerating. It really does list what must be hundreds of French officers along with about a sentence to summarize their career before and after the battle, and their fate.

If you click the link to the book on Amazon, you can view a sample of the first few pages of the book. This will give you an idea of how the Russian forces are described, (with portraits of many officers in the margins) in addition to a page explaining the Russian flags. Amazon doesn't show a sample page showing the uniform plates int he book, or the level of detail shown for the French forces, but they are quite good. Here are some sample pictures from the book. 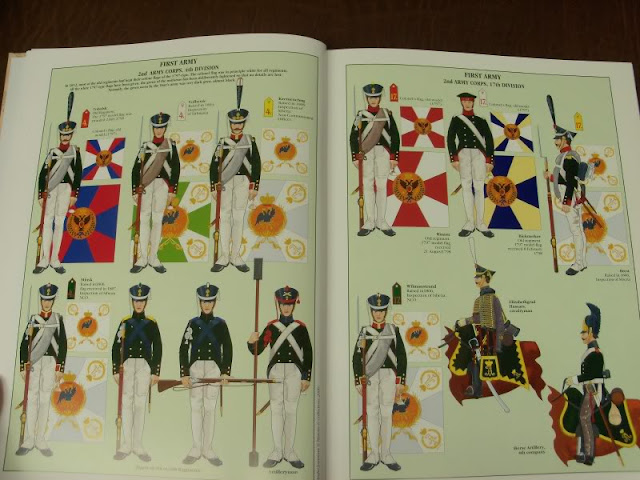 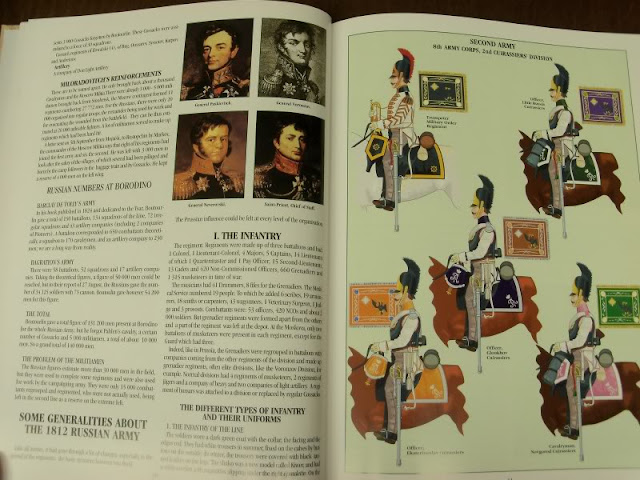 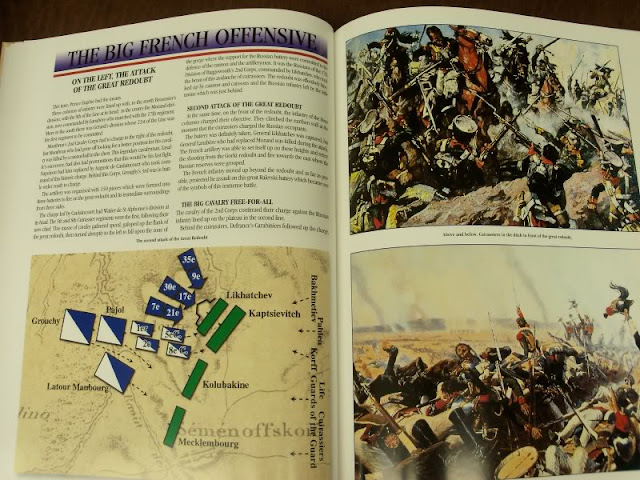 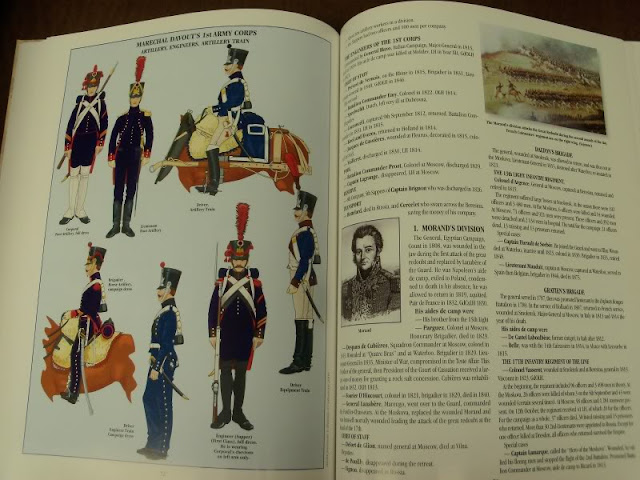 In summary, the book is a great reference with plenty of uniform plates, portraits, and organizational details, especially for the French forces, though it does assume some knowledge of the basics of the uniforms. So as a uniform reference, it is quite good, though it doesn't clearly lay out everything you'd ever need to know. If you want an introduction to or narrative description of the Battle of Borodino, or the larger campaign in Russia, you aren't going to get it from the few pages of coverage in this book.

The book can be ordered at a significant discount from Amazon.