At this point in the campaign, the Ogres, who had not yet fought a battle, were switched with another High Elf player. So the two "3" flag markers would now represent the High Elf Blue and High Elf Purple armies. This player would not have a Lord level character for the campaign.

With their Beastman allies having suffered great losses, the Vampire Counts staged a bit of a counter-attack. They urged the Beastman 1st army, led by their Beastlord, to move back up to St. Mer-Eglise to re-join the war. The Vampire Counts 1st Army pursued and attacked the retreating Bretonnian 2nd Army and massacred the remnants. Only a few remaining Grail Knights fled to escape the slaughter, but Byron Manfred was seriously injured in the battle.

The Vampire Counts 3rd Army moved into defensive positions controlling the bridge near Soude to prevent any possible advance towards their fortress. Their leader, The Master, moved into the 2nd Army and led them South out of Poussenc to attack the Elf 2nd Army. With the overpowering necromantic magic of The Master aiding them, the Vampire Counts Army massacred the High Elves, destroying them completely. 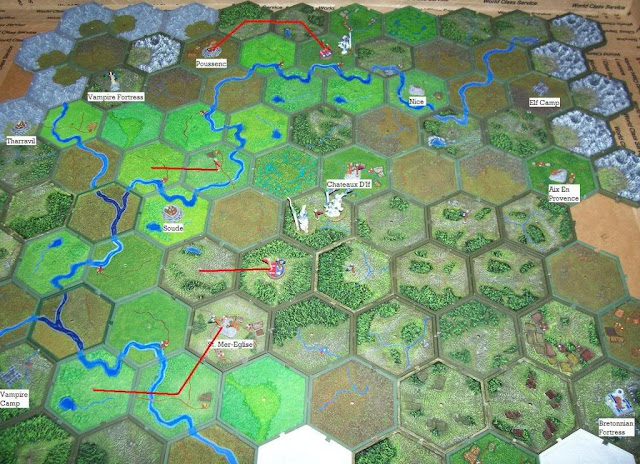 The Bretonnians and High Elves had just suffered their first real setbacks of the campaign, and responded swiftly with a massive offensive. The Bretonnian 1st Army simply moved a little east towards Chateaux D'If, remaining in reserve. The High Elf Blue Army maneuvered around the Vampire Counts 1st Army to attack the Beastman 1st Army in the village of St. Mer-Eglise.

The High Elf 1st Army, led by Lord Tethelion of Caledor riding his mighty Dragon, moved North to attack the Vampire Counts 3rd Army defending the bridge near Soude. And, in one of the great feats of stragic meaneuvering in the history of the Old World, the High Elf Purple Army swung around to the South, crossed the bridge at Nice, and turned back North to spring a surprise attack on the Vampire Counts 2nd Army. 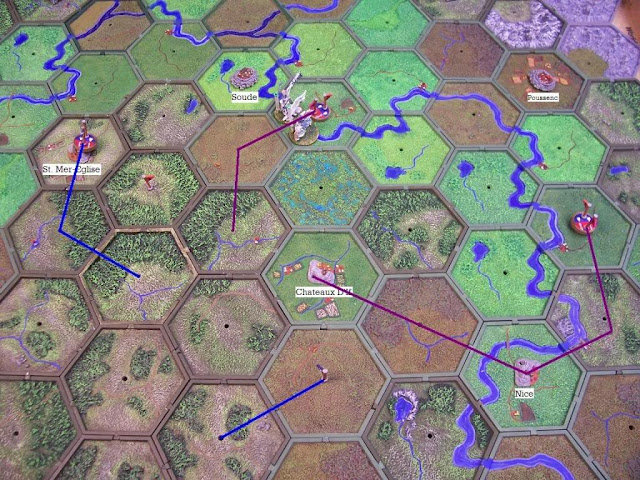 Even though Count Tepes was struck down by the might High Elf Dragon, his honor guard and the remnants of his army managed to hold off the Elf attack at the bridge and defeat them solidly. The High Elves fled in disarray after their fleeing commander, Prince Tethelion of Caledor, and his dragon.

The High Elf Purple army marched swiftly, all the way from Chateaux D'If, across the Grismeire river, through Nice, and finally North along the river to attack the Vampire Counts 2nd army. The High Elves spread out along a wide front, hoping to trap the Vampire Counts army against the river, but that would be their undoing. The Vampire Lord directed his army from the safety of a haunted house, protected by Grave Guard. The sent the bulk of his army against the left flank of the Elves. His most powerful unit, Grave Guard with great weapons, led by his army standard bearing Wight King with the Drakenhof banner, fought off nearly the entire High Elf left flank when it destroyed two chariots, and cause a large unit of Sea Guard containing the Elf general to flee.

The Vampire Counts then attempted to swing their forces to form a new line against the remaining High Elf right flank. As they did so, they suffered huge casualties from the magical onslaught of three mages added to the massive firepower of sea guard, bowmen, and bolt throwers. However, the ranged attacks were not enough to defeat the Vampire Counts, who could use their necromancy to replace some of the casualties. Once the Vampire Counts army had finally gotten all of their forces into a new battle line facing the remaining High Elves, it was clear that victory was impossible for the Elves. With their general already gone, the rest of the army retreated. Their army was too depleted to continue on it's own, and would join up with the High Elf Blue army to replace some of their casualties. 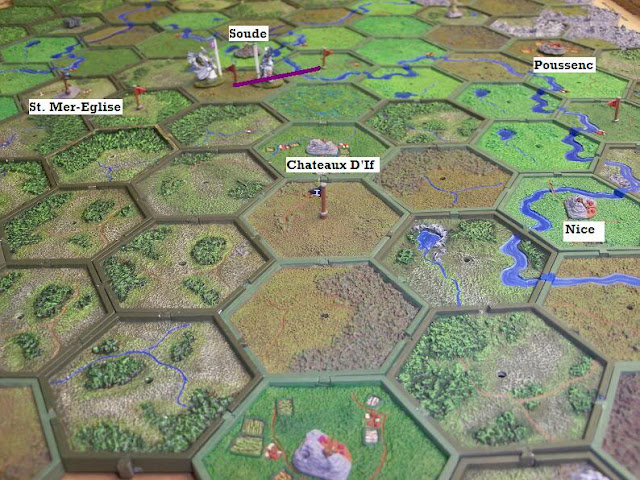 The Vampire Counts armies had weathered the enemy attacks. They could continue to send their forces out to search for the powerful artifact they came for, though the enemy still had several armies in the area to oppose them.
Posted by Craig Welter at 8:00 AM